“I support your right to protest, as long as you don’t break the law…”

“I support your right to protest, as long as you don’t break the law”. How many times have you heard this statement from police, from politicians, from passers by, or even friends and family?

A Victorian Premier, when questioned about protesters picketing a company building said that while he respected the right of people to protest peacefully, “they have no right to break the law.”[1]

“The Government supports peoples’ right to protest lawfully. These amendments will preserve that right, so long as the protest activities do not put anyone’s safety at risk or break the law” states another government media release a few years back.

This supposed support for the right to protest, as long as it is “lawful”, assumes a great number of things. It assumes that in Australia we have ample and sufficient political space for us to protest. However, the criminal law throughout Australia encompasses a huge range of offenses that can be and are used against activists if the police or the government of the day choose. How much political space we actually have depends on a complex range of factors.

It also assumes a level of legal clarity that simply does not exist. When it comes to public protests or political actions, what is lawful and unlawful is often very confusing and is always changing as new laws are introduced and old laws re-applied or changed. Police will often use a legal construct called ‘Breach of the Peace‘ as the reason to arrest, to move-on or use force against protesters – yet that legal term is extraordinarily vague and open almost entirely to the police member’s interpretation and ‘reasonable belief’. 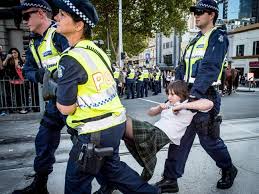 Although lawyers can provide advice about what the current law says and what charges are possible, the way in which police and government apply and use the law is always changing and hard to pin down.

Police have a fair degree of discretion about how they apply a particular law, what arrest power they use and what charges to lay at a particular time. They decide whether they arrest or charge at all. Police may simply stand by when activists chalk on the road during one protest, or they may arrest people at a different protest for doing exactly the same thing.

Seemingly innocuous activities such as honking your horn as you drive past a picket or weaving ribbon through a wire fence have been interpreted as offenses in Australia. Mostly they are ignored – but police could charge you with a traffic offense if they choose to.

When activists camp on public land at or near the site of a protest, local council powers may be used by police even when no issue of trespass arises. Decades old and archaic council by-laws can be revived for an anti-protest purpose. Activists handing out leaflets in Melbourne were once fined using a by-law that hadn’t been enforced since the 1960s.[2]

When existing laws are not adequate to restrict activists or stifle our ability to protest, a new law can be created, sometimes specifically to deal with a particular protest.

However, after the Embassy had grown in size and had become a powerful international symbol of Aboriginal land rights, the government made a minor amendment to the Trespass on Commonwealth Lands Ordinance in a midnight sitting which banned camping on unleased Commonwealth land within Canberra. Suddenly, the Tent Embassy was unlawful.

On July 20, just hours after the new law came into effect, police moved in forcibly evicting the tents and arresting activists.

People who say that they support protest as long as it doesn’t break the law’, are also saying that they believe  activist do not really need to break the law in order to be effective. Well, history says otherwise.

Sometimes breaking the law is the whole point

Civil disobedience is the deliberate and conscious refusal to obey, or violation of, a law believed to be unjust.

The deliberate violation of laws has played a crucial part in Australian political history. The Aboriginal land rights and civil rights movement, union struggles for wages and the eight hour day, women’s campaigns for the vote, and the modern peace, social justice and environmental movements have all been effective. Hundreds of people have been arrested in large civil disobedience actions throughout Australia at many protests against US bases, uranium mines, asylum seeker detention centres and blockades of old growth logging operations.

A famous and influential theorist of civil disobedience in the western world was Henry David Thoreau.  Thoreau’s essay, On the Duty of Civil Disobedience (1849), influenced Gandhi, Martin Luther King, and countless other activists.

“It is not desirable to cultivate a respect for the law, so much for the right Law never made men a whit more just; and by means of their respect for it, even the well-disposed are daily made the agents of injustice. . . the demands of conscience are higher than the demands of the law.”

To break or not to break the law…

Although some activists may knowingly break laws, or engage in deliberate civil disobedience, not all activists deliberately seek to break the law.

Those who do so often consider and weigh up the costs and consequences of unlawful action carefully and make clear choices.

Even activists who go to great lengths to stay within the law can inadvertently break laws and find themselves arrested. Laws can be used against activists in order to control or stifle protest and dissent even when there is no intention by activists to break the law.

It is not the case that activists are criminals. It is more often the case of the legal system working to criminalise activists.

So why is this important?

This so called distinction, between ‘lawful’ and ‘unlawful’ forms of protest is an artificial and deliberate one.

The distinction is used politically to restrict protest action to what is perceived to be less threatening; protest that is easier to police and contain.

The distinction is also used in an attempt to divide  protest movements into those engaged in ‘lawful’ protests from those who may used ‘unlawful’ forms of protest of resistance – a divisive tactic aimed at deterring more conservative groups or members of the public from working with groups involved with civil disobedience.

The ‘lawful / unlawful’ distinction attempts to generate an arbitrary boundary around forms of protest available to the movement – a boundary that at all times should remain within the control of the movement itself.

Anthony is a member of Melbourne Activist Legal Support and the organiser of multiple Legal and Human Rights Observer teams since the World Economic Forum protests in 2001.

This article originally appeared in an earlier form on activistrights.org.au, published by the Fitzroy Legal Service. These views are his own.

One thought on “Lawful or Unlawful?”