Identifying police at protests can be tricky business.

There are often different units with different uniforms and gear, different ranks and then police come to protests with specialist roles.

The identification of individual officers goes to the heart of accountability. It is useful for Legal Observers, journalists, street medics and activists to have an idea who is who. With accurate identification we can get a sense of how different police units might act and more accurately identify police in the case of an incident or for an eventual complaint or legal action.

The Victorian State Government has been investing a significant amount in specialist teams since 2009 when the large Operations Response Unit was established,  including protective armor, new equipment and specialist training. The latest increase in police numbers announced by Premier Andrews in December 2016 included as least 40 new Public Order Response Team (PORT) officers to increase capacity to rapidly respond to incidents involving “hostile crowds”.

The use of specialist, paramilitary style police units has been the subject of much research, analysis and commentary, in particular since the high toll of police shootings in Victoria, many by the Special Operations Group (see below) in the late 80’s and early 90’s and has been driven in part by internal police union agitation to lower police injuries with protective gear and equipment that reduces physical contact (such as tasers and OC spray) for occupational health and safety reasons. But the global policing trend toward military-like tactics, training, uniforms and equipment has undoubtedly been driven by the enormous growth in the highly lucrative international trade in repressive technologies. The rapid investment in counter-terrorism since September 11, 2001 has also resulted in a massive transfer of tactics, knowledge and equipment between police and militaries. Professor Jude McCulloch’s Blue Army, Paramiltary Policing in Australia is a great place to start if you want to delve into this more.

As David Vakallis and Jude McCulloch argue, since 2001 the trend towards more militarised policing at Victorian protests has “escalated such that the clatter of riot shields and the acrid sting of capsicum spray have become something to expect from police at protests.”

A more general discussion on why police choose certain tactics at protests can be found here.

This article, however, is focusing upon identifying the name, rank of individual police and distinguishing between the various police units at protest events in Victoria.

By their own regulations, VicPol members in uniform are required to wear current issue name tags that specify first name or initial/s, surname and rank. (Victoria Police Manual, Uniform and Appearance Standards, Oct 2016)
Despite calls by legal and human rights groups for many years, Legal Observers still note that the wearing visible name tags at protest events is inconsistent and that the ease of obscuring or removing a name tag poses serious problems for accountability.
If police officers cannot be identified then they can act with a high degree of impunity; research suggests that police officers who wear nametags are more conscious of the needs of the general public they are interacting with. Nametags, therefore, are an important safeguard that can help ensure individual police are held responsible for their actions.
By foregoing a nametag, police are able to assume the power of a collective identity without exposing their individuality. This is a process known as de-individuation, and can lead to higher instances of negative or socially irresponsible behaviour.
‘I tried to avoid the police without name badges, it seemed clear to me that they
were more prepared to be aggressive. I witnessed one police officer without a
badge punching a protester in the face.’ – Jing, 27. Occupy Melbourne protester 2011

Firstly – there are 13 different ranks in Victoria Police – from Constable to Chief Commissioner. The main ones you will see at a protest event are pictured below.

When you are liaising with police take note of their rank.  You should be speaking with someone who is a Sergeant or above and if you want to speak with a senior officer then look for the three pips. Often Inspectors are the Forward Commanders for any large protest but you can always ask for the senior officer or OIC – Officer In Charge –  when you want to speak with the most senior police officer present.

At large protests police will be drawn from other duties and also from specialist units, depending upon the size, scale and the police’s assessment of the nature of the protest.

Operations Response Unit, which was set up around 2009 employs 250-300 staff, has an intelligence cell and has access to about 68 vehicles. It is designed to provide rapid and ready response to major incidents and disasters at short notice.

The ORU members are trained to tackle issues such as CBD violence, rural traffic issues, weapons searches and crime or drug operations.

The massive investment in this new unit was authorised by former Chief Commissioner Simon Overland and boosted by his successor Ken Lay as part of a push to reintroduce ‘low-tolerance and pro-active’ policing across the state. The idea is that if police can deploy in large numbers as early as possible their presence will deter violence. The sheer scale of policing we have seen at recent Melbourne protests have reflected this ‘force of numbers’ approach.

The Public Order Response Team (PORT) pictured above and below, are part of the ORU and includes 200 or so police members drawn from general duties who have been provided with specialist crowd control training. PORT is designed to provide a rapid and ‘force of numbers’ response to public order incidents and has dedicated vehicles and riot control equipment.

It was formed in June 2011 partly in response to a spate of ‘out of control’ suburban teenage parties and also in the wake of the London riots of that year. The primary objective of PORT is to “restore and maintain public order in volatile and/or hostile crowd environments and certain emergency management situations.”

They are often sent out to back local police targeting anti-social behaviour and public drunkenness but are also regularly deployed at protest events.   Not all PORT members wear the helmets and protective gear but are most often deployed in formations, lines or units at protests. Depending upon the weather and conditions PORT will have standard yellow vests, clear goggles and look like general duties police.

The several hundred PORT members are trained in specific tactics to deal with public order and “riot” situations.

What is defined as a ‘riot’ and who defines it is extraordinarily problematic.  We know that they have trained with tear gas and full length riot shields that we have not yet seen on Melbourne’s streets.  You can see some of this training on YouTube here.

A note on training. Police training in relation to protests tends to influence the approach taken to protesters.  If police training implies that protesters are akin to insurgents or terrorists and that crowds are inherently dangerous, and concentrates or tactical issues related to riot control, then the attitude of individual police to protesters is likely to be harsh. As we can see in this Victoria police YouTube video, out of uniform police members playing the part of protesters in the training exercise are violent, abusive and throwing objects. Undoubtedly this sort of training would colour the attitudes of police and their approaches to protesters.

Launched in 2004, Critical Incident Response Teams, (pictured below) provide 24 hours a day, 7 days a week response, which includes a negotiator capability, to incidents  involving firearms, suicide, consular threats or forced entry searches that not meet the criteria of the Special Operations Group (SOG).

They have access to tasers, beanbag (extendable baton) rounds, and machine guns, body armour and helmets as well as armoured vehicles.  CIRT were the first in Victoria to be provided with OC spray / foam and are only rarely present at large protest events where police anticipate violence, (or large assertive crowds that they fear that they wont be able to control without sub-lethal weaponry.)  If deployed, CIRT will usually be kept in the background at protests. They are also likely to have a different chain of command than PORT.

CIRT at a Melbourne protest, December 2016

The elite paramilitary Special Operations Group (SOG) respond to incidents that are beyond the scope, experience and skill level of (CIRT) at any time.  SOG will be rarely, if ever, deployed to protest events. The SOG are highly trained in anti-terrorism tactics, building entry skills, and conducting high risk searches. Formed in 1977 its main function was, and remains, to provide a response to politically motivated and criminal terrorist activity. They have been known to refer to themselves as the “Sons Of God”.

The Mounted Branch are hard to miss at protests in Victoria and remain one of the more dangerous and controversial units in Victoria Police having been responsible for a huge number of protester injuries over the past decade or more.  Police horses are used to provide support to police at events “requiring crowd control, protests or marches needing public order management”. 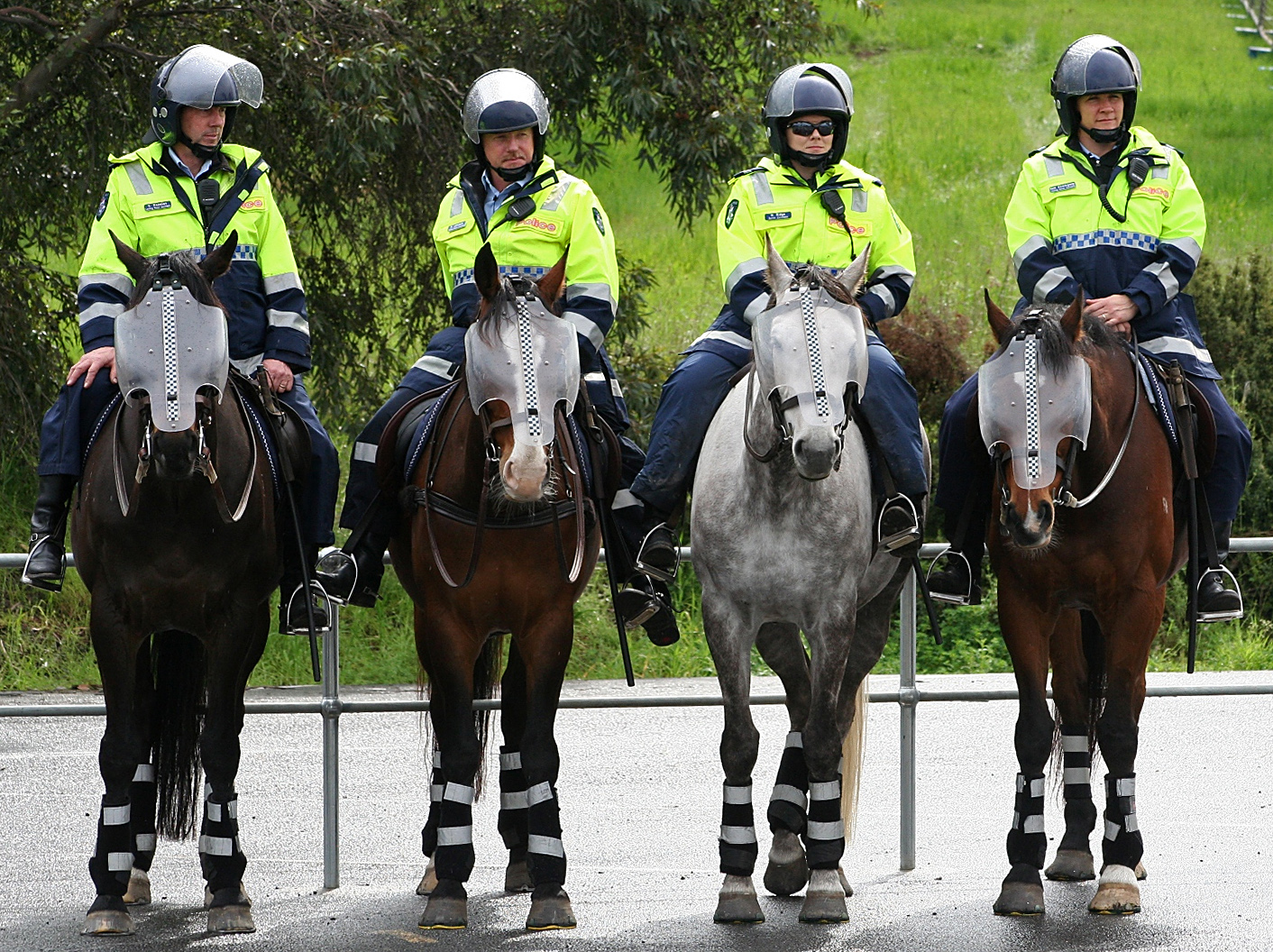 The Mounted Branch members train with other specialist police units, including the Public Order Response Team (PORT) and are most commonly deployed into crowds when police perceive that police on the ground are loosing control or at risk.   Lines of police horses are used as cordons when stationary, or as moving cordons behind marches, but can also be run directly into crowds, sometimes quite rapidly, to disperse or move people away from buildings or away from police lines. The use of police horses is always problematic in that the risk of serious and life threatening injury to people in crowd situations is extraordinarily high.  When horses are run directly into or near large crowds of people who can not move back it  is too easy for people to be violently pushed by the horses, to fall under, and be trampled.

The Victorian Parliament have not had any regulatory oversight on how police horses are used for many decades and their use arguably impinges upon the right to peaceful assembly.

The Victoria Police Search and Rescue squad (SAR) conduct land and water search and rescue operations including people missing in remote and difficult areas.  They are equipped with climbing and cutting equipment.  Search and Rescue are commonly called out to protest events when activists chain, lock, U-bolt or otherwise physically attach themselves to buildings or equipment or are required to be removed from tripods, tree-sits or high-location banner-drop actions.   Generally, Search & Rescue members are professional and courteous with activists and many of them have experience with various activist lock-on devices and high location protests.

Do Not Resist” and the Crisis of Police Militarization, Dexter Filkins, The New Yorker, 13 May, 2016,

4 thoughts on “Who’s who in Victoria Police”